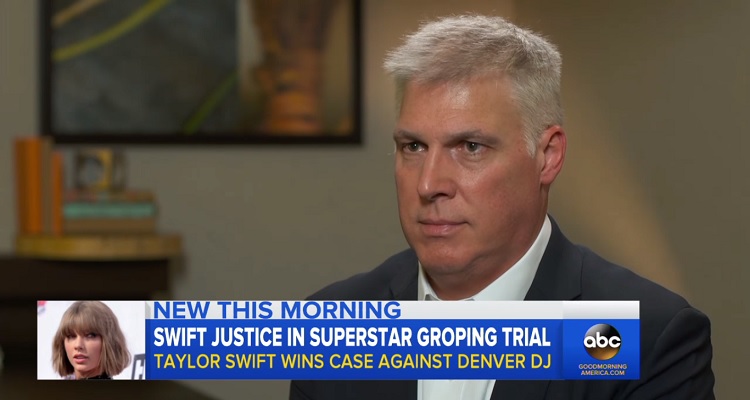 He lost his career after Taylor Swift accused him of groping.  Now, deejay David Mueller has a new job at a Mississippi radio station.  That station has already received a bomb threat.

According to Taylor Swift, Denver-based radio deejay David Mueller groped her rear end after a performance five years ago.  Swift’s lawyers claimed that Mueller lifted up Swift’s skirt while standing next to his girlfriend and the singer’s trained bodyguards.

Despite lacking evidence to support her claim, Denver’s KYGO-FM immediately dismissed Mueller.  He would subsequently lose a $3 million countersuit against the singer for defamation.  A court later ordered the deejay to pay Taylor Swift a symbolic fine of $1 (symbolically, he refused the payment).

Now, David Mueller has found a new job.  Mississippi’s Delta Radio country station WMYQ-FM has hired the deejay.  He will co-host KIX 92.7’s breakfast show, Jackson and Jonbob, under the pseudonym ‘Stonewall Jackson’.  The deejay will also serve as a marketing consultant.

So, despite the controversy surrounding the deejay, why did the radio station hire Mueller?

Because the radio station owner believes that he’s actually innocent.

He added that the hiring would also attract publicity to the station.

Since the hiring, infuriated Taylor Swift fans have reportedly flooded WMYQ-FM’s Facebook page with spiteful comments.  In the wake of the Time’s Up and #MeToo movements, they’ve asked the station to immediately fire David Mueller.  Fuss, however, defended the hiring and downplayed the comments.

“It’s just people who don’t have a clue, or don’t really have any knowledge of the facts.”

Fuss, however, may have underestimated fans’ outrage.  During Mueller’s first week at his new job, someone e-mailed a bomb threat to KIX 92.7, forcing the station to evacuate the building.   TMZ reports that officers in Greenwood, Mississippi brought in a bomb-sniffing dog.

Thankfully, the search came up empty.  Federal authorities have reportedly taken over the investigation over the bomb threat.