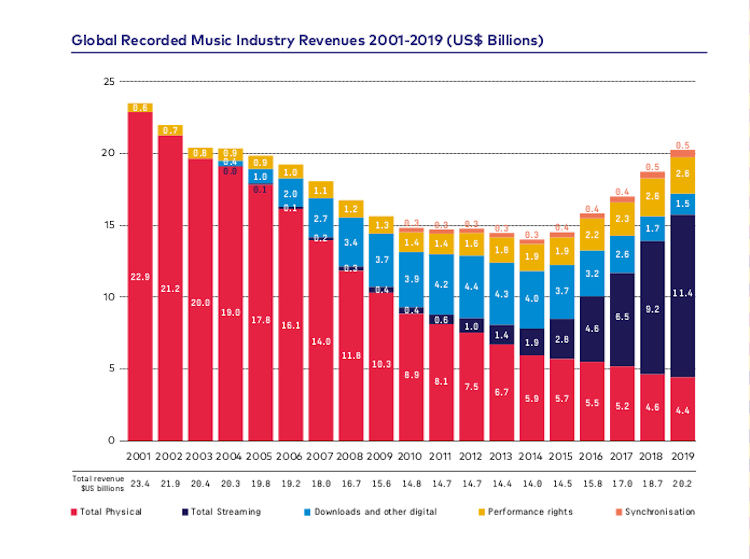 The global recorded music market grew by over eight percent in 2019, to $20.2 billion, and there are now more than 340 million worldwide music streaming service subscribers.

The International Federation of the Phonographic Institute (IFPI) published these and other telling stats in its Global Music Report, which was shared with Digital Music News this morning.  The eye-popping 341 million figure counts total subscribers at the end of 2019, which means this figure is probably a lot higher.

Sync revenue increased by 5.8 percent from 2018’s level, whereas physical revenue dropped by some 5.3 percent. Significantly, though, vinyl sales rose by over five percent and contributed to overall physical sales growth in the United States (3.2 percent) and Spain (7.2 percent).

Each of the world’s regions experienced music industry growth in 2019, per the IFPI, though Latin America led the field with 18.9 percent. The U.S. and Canada followed with 10.4 percent growth, and Europe secured the third-place spot with 7.2 percent.

The IFPI Global Music Report 2019 presented a few other interesting pieces of information as well.

First, the report ranked Taylor Swift first on its “Global Recording Artist” index, which is “the only ranking to accurately measure consumption across all formats” and in each nation. Ed Sheeran nabbed the chart’s second spot, Post Malone finished third, and Billie Eilish laid claim to the fourth slot. Queen rounded out the top five, and notably, the IFPI ranked BTS seventh, between Ariana Grande and Drake.