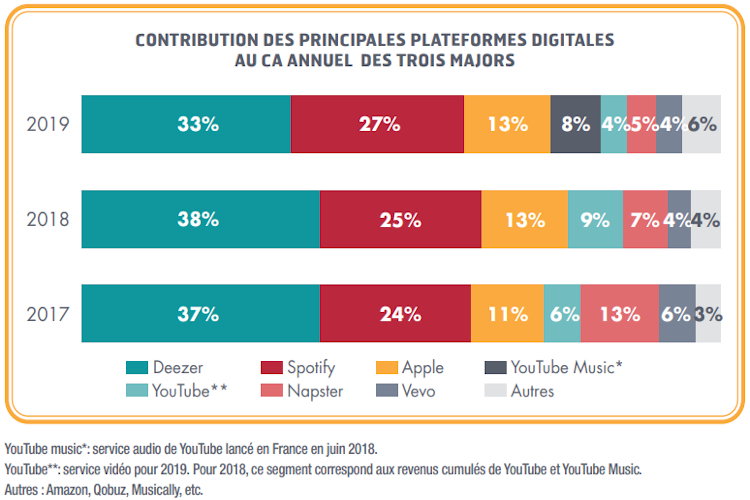 Predictably, the pandemic exacerbated physical music’s years-running decline, with total sales dropping 36.8 percent compared to 2019’s opening half. On the other side of the coin, streaming continued to pick up steam, growing by 17.7 percent (to approximately $248.98 million) year over year; 2019’s opening half brought with it a 23 percent streaming-revenue hike for the French recorded music industry.

As a whole, streaming accounted for about 76 percent of income within France’s recorded music space during the period.

In other noteworthy data disclosed as part of SNEP’s half-year analysis, total streaming volume grew approximately 15 percent from the first six months of 2019 (to an average of 1.5 billion plays per week), and about 78 percent of streams were attributable to paid accounts. (For reference, Spotify revealed in its most recent earnings report that 57 percent of MAUs stream on ad-supported accounts.)

Physical sales and their $65.31 million (€55.8 million) in half-year revenue represent a 37 percent dip from the same window last year. Vinyl continued to perform relatively well, however, accounting for close to a third of physical sales and falling 14 percent year over year, compared to the CD’s 39 percent decrease.

France-based Deezer led the market in terms of streaming revenue per platform in 2019 – but not by much, comprising 33 percent of the market to Spotify’s 27 percent and Apple Music’s 13 percent. Both Spotify and Apple Music’s market shares have grown slightly in recent years (apparently at Deezer’s expense, including a five percent decline from 2018 to 2019), and SNEP emphasized that YouTube – not YouTube Music – led 2019 in total stream volume but paid just four percent of streaming revenue.

Despite the massive falloff in physical sales and the pressing need for live music’s return – a point that SNEP acknowledged – the half-year analysis is decidedly less bleak than some studies forecasted. And other regions are also showing buoyancy.

Stateside, recorded music revenue grew 5.6 percent between 2020 and 2019’s first halves. Germany’s recorded music industry posted similar half-year 2020 growth, at 4.8 percent, and Canadians are pivoting to streaming at a quicker rate than residents of many other countries.