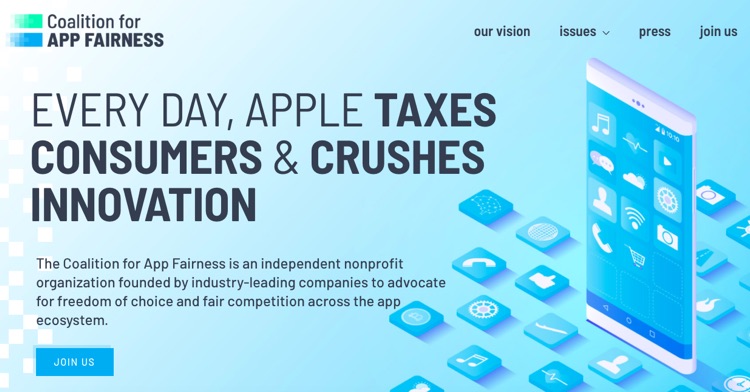 Spotify is uniting a number of Apple’s powerful critics under a single banner – the ‘Coalition for App Fairness.’

The group says it aims to create a level playing field for app businesses and give people freedom of choice on their devices. Founding members of the new Coalition include Spotify, Epic Games, Basecamp, Match Group, Tile, Blix, and Deezer. It’s a coordinated effort to protest Apple’s current App Store rules.

One immediate goal of the group is to get smaller developers to join the Coalition, to give it more weight. But app developers and companies of any size are welcome to join the new Coalition. The group cites three main issues that should be addressed for app fairness on Apple devices.

Unsurprisingly, Apple’s 30% ‘Apple Tax’ is the chief point of contention for Coalition members, but there are other issues.

Another issue highlighted includes the lack of competitive options for app distribution on iOS devices. Android doesn’t suffer from the same problem because Google allows apps to be installed outside of the Play Store on Android.

Finally, Coalition members claim that Apple uses its platform control to favor its own apps. Spotify and Tile specifically have spoken about this on both the hardware and software side of things. For example, Apple favors Apple Music and has introduced AirTags – a direct hardware competitor to Tile.

Separately, Epic Games is waging an all-out war against Apple’s removal of Fortnite from iOS devices after it violated terms. (So far the courts appear to agree with Apple’s assessment that Epic’s predicament is of its own making.)

Members of the Coalition are proposing a code of conduct for Apple and other platform owners to accept. The goals are ambitious, and it’s unlikely Apple will agree to any of them since it concedes too much.

The Coalition says it should not be forced to use an exclusive App Store. It also demands that developers not be forced to pay “unfair, unreasonable or discriminatory fees or revenue shares.”

Members of the Coalition are hoping they’ll be able to attract enough smaller developers to form a united front. Out of all the Coalition members, only Epic Games is no longer listed on iOS. With apps from Spotify, Match, and Basecamp still on the platform, does the message mean much?

EU courts and antitrust regulators will likely be called upon to decide what’s a fair revenue percentage. But if Coalition members get their wish, they could establish their own App Stores on iOS. In fact, that’s what Epic is pushing for when it comes to Fortnite.