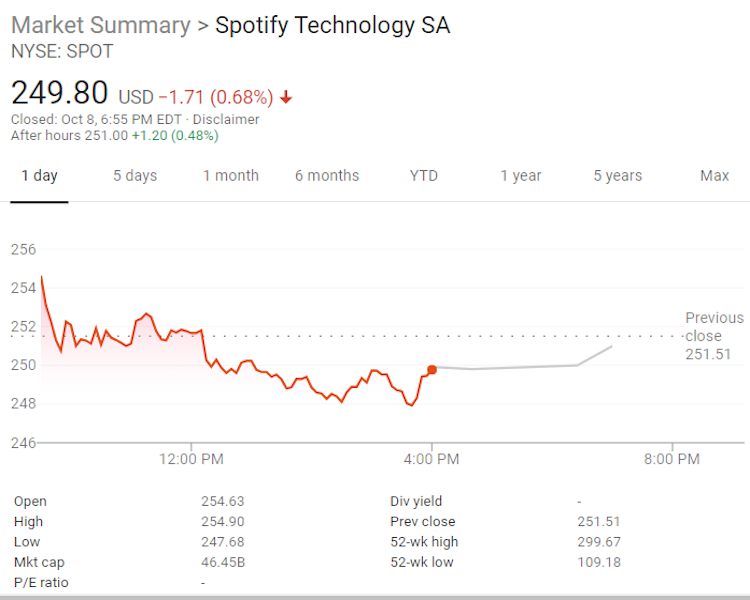 Spotify stock (SPOT) closed at $249.80 today, essentially splitting the difference between financial analysts’ high and low target prices. Consequently, many investors are speculating as to whether the shares are set to continue ascending – or experience a major decline – across the remainder of 2020.

In spite of the COVID-19 pandemic and its devastating economic impact, Spotify stock touched several all-time-high valuations throughout the year. From a $150 price point at January’s start (up from approximately $112 per share in September of 2019), the figure nearly doubled, to roughly $300, around mid-July.

And after a plateau that spanned about the first three weeks of August, the stock returned to the $300 range at the beginning of September.

The following week brought with it an apparent selloff – as well as a $50 or so dip in per-share value. An additional (albeit dramatically smaller) falloff sent SPOT into the low-$230s, but as today’s aforementioned closing price demonstrates, Spotify stock has since returned to (and held steady at) $240 to $250 per share in October.

While dramatically higher than the music streaming service’s stock price in January – even the current $100 or so boost represents a nearly $19 billion market cap hike – some believe that SPOT’s present positioning signifies something of a crossroads.

To be sure, RBC Capital Markets has set a SPOT target price of $320, on the high end, whereas Bernstein has adopted a bearish view and a $172 Spotify stock target price on the low end. With the Stockholm-based company’s stock essentially striking a balance between the two numbers (including an approximate difference of $70 and $78 to RBC Capital Markets and Bernstein’s respective predictions), additional market implications will accompany the coming weeks’ price fluctuations.

And in terms of which way Spotify stock will trend – towards the $150 per share it touched at 2020’s opening or the record $300 or so it reached in July and September – several factors appear to be of particular significance.

Beginning with the most obvious consideration, the company’s upcoming Q3 2020 earnings report will prove important. In Q2, the platform continued to add subscribers but lost advertising revenue and missed its earnings mark. If the latter trend continued in the third quarter – and especially if new subscriptions fell off due to the pandemic – SPOT could move towards Bernstein’s target price.

Also worth emphasizing is that Spotify’s unprecedented market ascent arrived largely in tandem with the announcement of multiple exclusive podcast deals. The most noteworthy of these programs, The Joe Rogan Experience (JRE), cost the service a reported $100 million, but ushered in staggering gains. On May 18th, the day before Spotify formally unveiled the JRE agreement, SPOT closed at $161.43; by June 18th, the figure had reached $225.28.

Additionally, Spotify has nabbed other major podcasting contracts with Kim Kardashian West, Addison Rae, and WarnerMedia, to name some.

With the overarching vision (and hope) behind these offerings is to achieve (long-sought) profitability, the actual earnings associated with podcasts (and the portion of listeners who enjoy the programs) will be something to look for in the Q3 earnings report. For reference, the company’s Q2 2020 earnings analysis, which was published before JRE’s on-platform debut, showed that just 21 percent of Spotify’s monthly active users listened to at least one podcast.

Lastly, behind-the-scenes disputes about JRE, including employee demands for direct editorial oversight – and threats of a strike if certain episodes aren’t edited or removed – could factor into SPOT’s future.