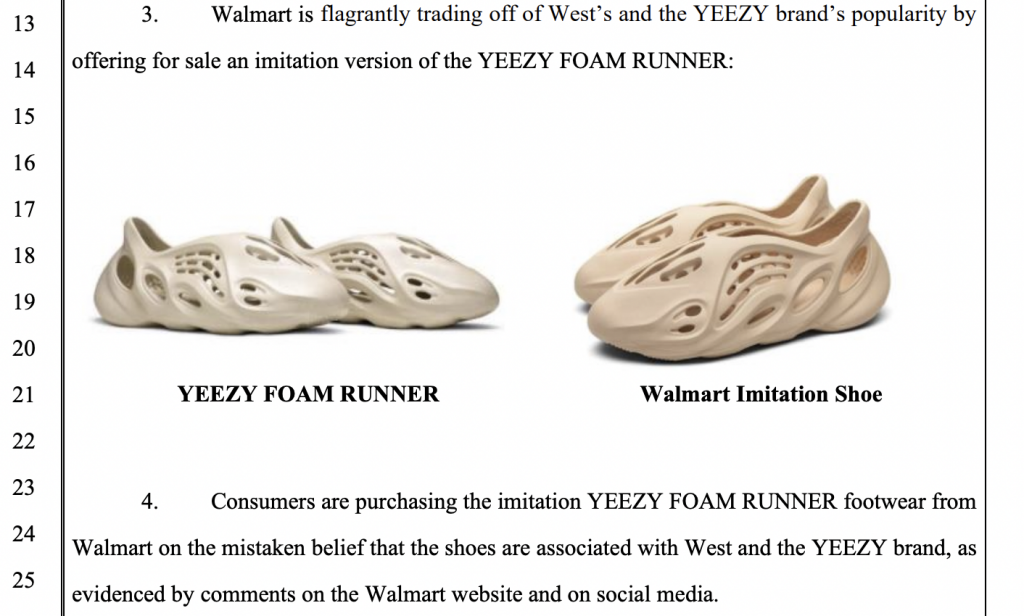 Walmart has removed certain clog-style foam shoes after being named in a lawsuit from Kanye West – though similar footwear products remain available for purchase on different platforms yet.

Kanye West submitted the complaint to a California federal court last week, alleging that Walmart was “flagrantly” capitalizing upon the popularity of the Yeezy brand by selling the imitation footwear. Customers, the firmly worded lawsuit alleged by disclosing Walmart.com reviews and social-media posts, were purchasing the (decidedly less expensive) knockoffs due to their resemblance to the authentic Foam Runner.

The latter – “a slip-on shoe that employs a flexible one-piece build constructed from algae,” with “a clog-like silhouette punctuated with cutouts of varying sizes and shapes” – went on sale for $75 in June of 2020, “instantly” sold out, and remains available to purchase (from resellers) for several times the retail price.

And while the similar-looking shoes allegedly sold on Walmart.com were “virtually indistinguishable” from the originals, they were also of “subpar quality” – leading to damage both in terms of “diminished sales” and the reputation of the authentic product and Yeezy, per the suit from Kanye West.

Walmart – which in April formally opposed West’s proposed logo for Yeezy, stating that it too closely resembled its own corporate symbol – promptly responded to reports of the complaint in a statement, emphasizing that individual sellers (and not the company itself) were offering the shoes.

“The product referenced in the complaint is not sold by Walmart, but rather by third-party Marketplace sellers,” relayed the Bentonville, Arkansas-headquartered company. “We take allegations like this seriously and are reviewing the claim. We will respond in court as appropriate after we have been served with the complaint.”

Furthermore, Walmart removed the items in question from its website, as initially mentioned, with searches for “Yeezy Foam Runners” returning zero results as of Monday afternoon; variations of this search also fail to bring up the knock-off shoes at the center of the lawsuit. But the products have become available for purchase elsewhere – raising questions about whether Kanye West (whose net worth remains a subject of discussion and debate) will pursue legal action against additional entities.

To be sure, an Ebay search for “foam runners,” with results filtered from the lowest price to the highest, produced all manner of clog-style items (some of which include “Kanye West” in their titles and product descriptions) at the time of this piece’s publishing. Plus, sellers have listed similar wares – for seemingly cheaper prices than the Ebay variations – via online marketplace Wish.

But neither the 44-year-old Kanye West (who is facing over $60,000 in court sanctions) nor Yeezy (which inked a major deal with Gap about one year ago) have publicly addressed these other foam-shoe products. West filed a lawsuit against a former intern towards this year’s start – about five months after being named in a massive complaint from video-technology company MyChannel.