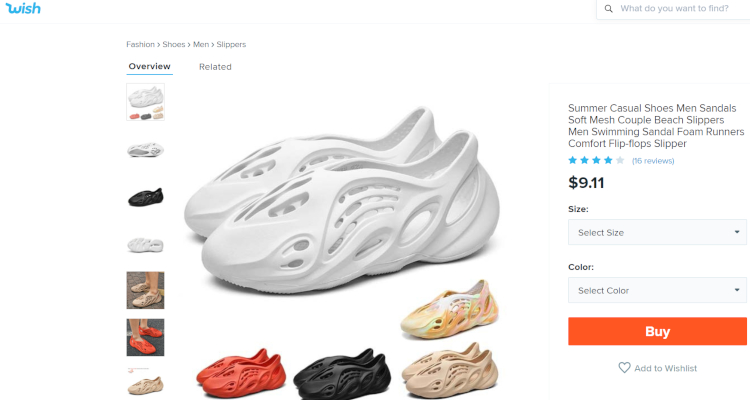 A Wish listing for what appears to be an imitation of the Yeezy Foam Runner.

In spite of the massive lawsuit that Kanye West filed over the alleged presence of knockoff Yeezy Foam Runners on Walmart’s website, imitation Foam Runners are still available – and for less than $10 per pair – through a number of other ecommerce platforms.

Kanye West named Walmart in the firmly worded complaint last week, alleging that the Bentonville, Arkansas-based company had “flagrantly” capitalized upon his popularity by selling knockoff Yeezy Foam Runners for far less than the authentic edition’s $75-per-pair retail price. And while the unauthorized footwear was “virtually indistinguishable” from the original, its “subpar quality” damaged the reputation of the Yeezy Foam Runners, according to the action.

Walmart emphasized in a public statement that third-party sellers – and not the retail giant itself – had offered the imitation Yeezy Foam Runners to customers. Though these third-party listings were no longer live on Walmart.com as of at least yesterday afternoon, all manner of similar products remain available through competing shopping sites.

Now, with the unlicensed Foam Runner lookalikes still little more than a click away, for customers, some are speculating as to whether Kanye West could move forward with additional legal actions in an effort to curb the bogus footwear’s prevalence.

To be sure, a variety of sub-$10 knockoff Yeezy Foam Runners were listed on Google Shopping at the time of this piece’s publishing, with other, similarly priced purchase options present on Ebay, Wish, and Etsy. That a portion of these items (and especially those appearing on Google Shopping) are matching against the search query “Yeezy Foam Runners” and similar inputs could potentially be the basis for a further claim, legal professionals have indicated. 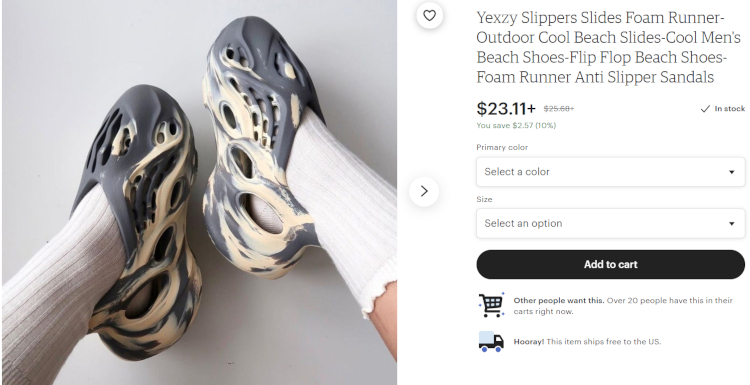 An Etsy listing for what appears to be an imitation of the Yeezy Foam Runner. 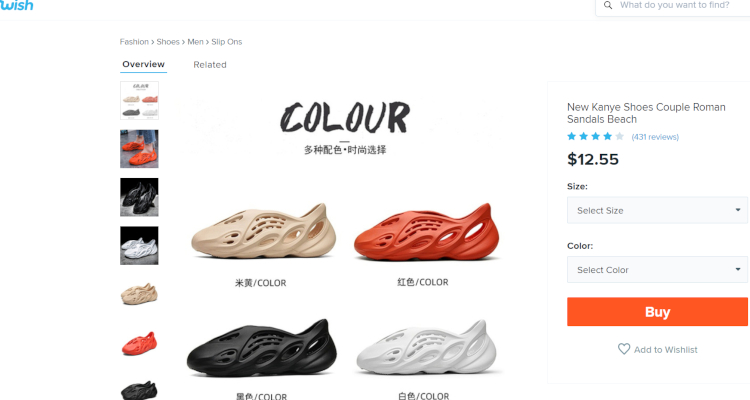 Another Wish listing for what appears to be an imitation of the Yeezy Foam Runner, this time featuring the word “Kanye” in the product title.

But Kanye West and his team haven’t yet commented publicly on the matter – that is, the ongoing presence of imitation Yeezy Foam Runners – and it remains to be seen whether the involved ecommerce platforms will remove the listings in question, particularly given the high-profile complaint that Walmart is facing over the matter.

About one year ago, Kanye West filed a trademark application for a Yeezy cosmetics line, just a week or so before inking a decade-long deal with Gap. As part of the latter, the billionaire rapper and San Francisco-headquartered Gap debuted the Gap Yeezy line, the first product of which, a $200 puffer jacket, became available for preorder three weeks back, on the rapper’s 44th birthday.

And coincidentally enough, Gap last Thursday, June 24th – the same day that West sued Walmart – promoted the debut of its “first-ever home collection,” which customers can purchase “exclusively at Walmart.”