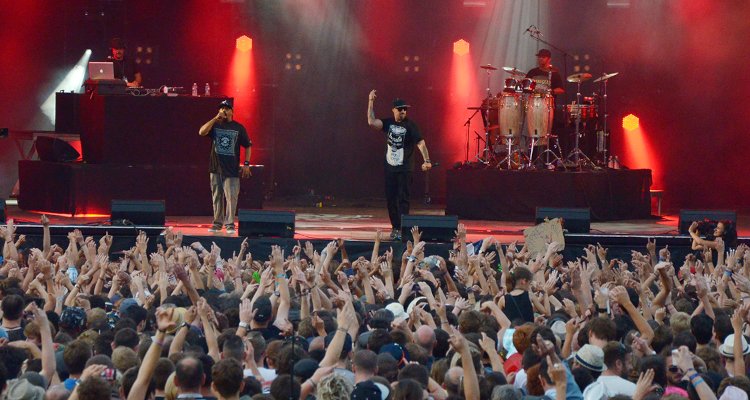 A live performance from Cypress Hill, which has made NFTs available to fans. Photo Credit: JB Quentin

Primary Wave, which is listed as an investor (along with Dapper Labs, Oaktree Capital, Shawn Mendes, and others) on Unblocked’s website, just recently unveiled the NFT partnership. The digital assets are designed “to promote upcoming milestones for” the 33-year-old Cypress Hill, according to the involved parties, and some of the “NFTs will allow fans to memorialize their experience” during in-person events.

Regarding the availability of these NFTs – which arrive as some are raising questions about the true value of the data units – Primary Wave, Unblocked, and Cypress Hill have directed fans to a platform called Rhthm, which bills itself as “the premier destination for collecting digital collectibles from your favorite artists.”

Rhthm, for its part, is “powered” by Unblocked, and one’s Unblocked account can be used to log in across all such “partner sites,” per the Rhthm FAQ section. Those who create a Rhthm account on or before Wednesday, December 15th, the same resource relays, will automatically be entered into a contest for “a free limited edition Cypress Hill collectible.”

Also worth mentioning is that Rhthm operates on the Flow blockchain, which was developed by the aforementioned Dapper Labs. And in yet another testament to the music industry’s growing involvement with blockchain, Dapper is likewise backed by Warner Music Group and Andreessen Horowitz, which yesterday led a funding round for music-investment platform Royal. (Nas, Logic, The Chainsmokers, and Kygo participated in the latter.)

Moving forward, Primary Wave – which has inked deals involving Stevie Nicks, Prince, Bob Marley, and many other well-known creators – intends “to launch NFTs for other artists on their roster” with Unblocked. And in a statement, Primary Wave chief content officer Natalia Nastaskin emphasized the “steady pipeline of artists” who are interested in offering NFTs to fans.

“Unblocked’s founding team’s vast knowledge and experience in tech, blockchain and cryptocurrency made them an incredibly compelling partner for us,” said the United Talent Agency veteran Nastaskin. “We are seamlessly aligned on our collective approach to building fan communities based on engagement through serialization and gamification of digital collectibles.

“We could not be more excited about our platform’s launch with Cypress Hill, to be followed by a steady pipeline of artists who are passionate about serving their fan bases with unique and dynamic drops,” she finished.

Since the start of October, TikTok, BTS agency Hybe, and Fox have taken steps to cash in on the NFT craze, and Universal Music Group went as far as creating a “band” featuring four digital characters from the Bored Ape Yacht Club NFT project.