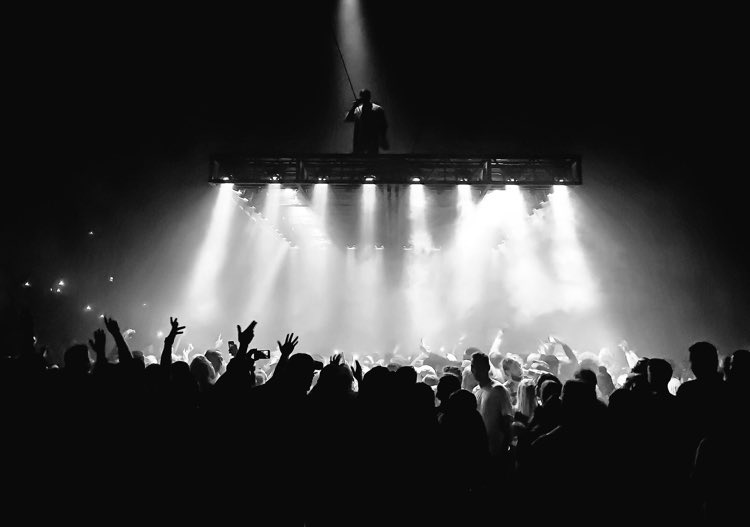 Kanye West performs at his ‘Life of Pablo Tour’ in Grand Rapids, MI.  The singer abruptly canceled his tour this week.

Kanye West is apparently suffering from ‘extreme sleep deprivation’ and mental exhaustion.  But is that just a scam to collect $30 million in tour cancellation insurance?

Did Kanye West just commit himself to UCLA Medical Center in Los Angeles as part of an elaborate scam to collect $30 million tour insurance money?  That’s a growing theory in the wake of an abrupt cancellation of all remaining dates on his ‘Life of Pablo’ tour, with estimated damages now reaching $30 million.

It’s a simple question: is Kanye simply making up an illness to scam his insurance provider?   Here’s why this whole thing just doesn’t stack up:

(1) Touring at this level isn’t ‘exhausting’.

Kanye West travels in luxury vehicles, which drive him from luxury jets to luxury hotels to luxury backstage lounges.  The entire time, he eats expensive food, gets plenty of rest in five-star hotels, and has personal assistants taking care of everything.

Shows are in the evening, so he has all day to relax, exercise, meditate, tweet, call his shrink, whatever.  Then, he can sleep in the next day.  Kanye even has days off, where he can do whatever he wants.

There’s nothing ‘mentally exhausting’ or ‘sleep depriving’ about any of that.

(2) Kanye West was committed to the hospital AFTER he cancelled his tour.

That’s right: the rapper had a mental exhaustion meltdown only *after* he nixed all of this remaining tour dates.  That’s now confirmed.  But canceling an entire tour carries liability: people need refunds, venues may decide to sue, and the artist might have to give back millions in advances.

In fact, there may be clauses in Kanye’s contract that he owes millions if he cancels dates without a good reason.

Did Kanye realize all of that after the fact, and claim ‘mental exhaustion’ to get out of it?

+ Kanye West Denies Saying, “I Hope They Build a Wall, I Hope They Get Rid of Them All”

(4) The Life of Pablo tour was cancelled without any reason given.

When Lady Gaga canceled the remaining dates of her ‘Born This Way Ball Tour’ in 2013, it was due to a major hip injury.  You saw it happen on stage.  And usually when an entire tour is cancelled, there’s a very serious reason.  In fact, this might be the first reason a tour was cancelled for no reason.

But Live Nation, which was promoting the entire Life of Pablo Tour, merely stated that the tour was off.  End of story.

It’s simple: if Kanye wants to make a claim, he has to make up a reason.

(4) Tour cancellation insurance can only be claimed for severe circumstances (like, a serious illness).

Here’s how tour cancellation insurance works.  An insurance company will pay for the missed revenues, ticket returns, and liabilities of a cancelled tour — but only if there’s a seriously ‘extenuating circumstance’ or ‘illness’.   For example, if a massive earthquake levels Los Angeles, you obviously can’t play that date.  Or, if a performer breaks his leg on stage and can’t continue.  The insurance company steps in and pays the difference.

(5) There are way too many outrageous ‘events’ when it comes to Kanye West or Kim Kardashian.

Kanye’s wife, Kim Kardashian, may have fabricated an entire robbery in Paris — just for the attention.

That’s a theory that hasn’t died, especially with zero leads or other credible information on Kim Kardashian’s robbery.  Even a Supreme Court Justice questioned whether that robbery was fabricated.

You really think Kanye West is above faking a mental breakdown?

(6) Kanye West will do anything for attention.  Anything.

Like, pledge his allegiance to Donald Trump for 40 minutes on stage.  And cancel a show in Sacramento after two songs, while denouncing Beyonce and Jay Z.

Or, canceling an entire tour.

But publicity stunts aren’t always free.  Someone has to pay for all those tickets, damages, lawsuits, and payments to support staff.

Maybe Kanye doesn’t want to get stuck paying that bill.