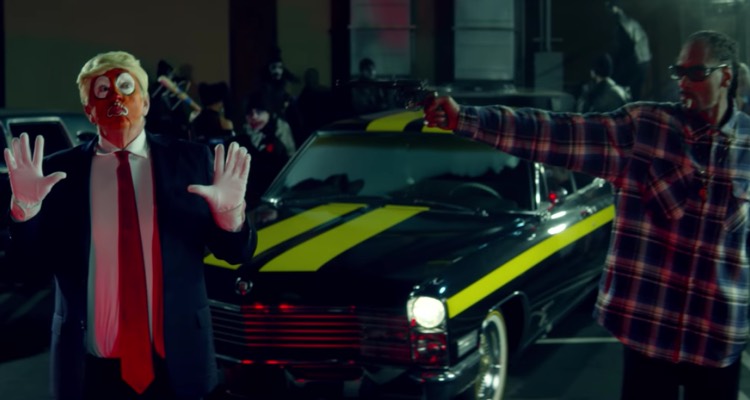 Within 24 hours of releasing a video simulating an assassination of Donald Trump, rapper Snoop Dogg is already receiving warnings.  That includes heat from both Congress and the White House, with Secret Service intervention potentially next.

Almost immediately, Snoop Dogg received sharp criticism from Republican Senator Marco Rubio, who issued a thinly-veiled warning.  “Snoop shouldn’t have done that,” Rubio warned to TMZ at Reagan National Airport. “We’ve had presidents assassinated before in this country, so anything like that is something people should really careful about.

“People can disagree on policy,” Rubio continued. “[But] we’ve gotta be very careful about that kind of thing, because [if] the wrong person sees that and gets the wrong idea, you could have a real problem.  I’m not sure what Snoop was thinking.

“He should think about that.”

The specific scene comes late in the just-released ‘Lavender,’ a macabre, clown-themed music video.  Snoop Dogg himself pulls the trigger against a clown-version of Donald Trump, with a very realistic gunshot noise ringing out.  In true circus fashion, the gun displays a ‘BANG’ flag at the last moment.

That ‘BANG’ puts Snoop Dogg ‘very close to the line,’ according to another warning from Trump’s attorney (more on that ahead).

The video was first uploaded Monday night, and quickly passed 1 million views.  As of Tuesday evening, that view count marched towards 2 million.

“There’s nothing funny about an assassination attempt on a president.”

Now, Donald Trump attorney Michael Cohen is stepping up the warning shots.  In an interview with TMZ Live, Cohen demanded an apology while hinting at a formal response ahead.  “It’s totally disgraceful,” Cohen blasted. “Snoop owes the president an apology.”

“There’s absolutely nothing funny about an assassination attempt on a president.  And I’m really shocked at him because I thought he was better than that.”

Cohen continued down the ‘shame on you path,’ while establishing that Snoop clearly simulated an assassination attempt.  “I’m not really sure I understand the artistic value to having somebody dress up as Trump and firing a weapon at him,” Cohen continued. “I certainly would not have accepted it if it was President Obama.  I certainly don’t accept it as President Trump, and in all fairness, it’s not funny, it’s not artistic.”

+ Big Sean Threatens to Brutally Murder Donald Trump With an Ice Pick
As a conclusion, Cohen further lectured Snoop to ‘respect the office of the president,’ which alludes to clear statutes against presidential death threats.  And in true lawyer fashion, Cohen also moved to separate ‘artistic freedom’ from criminal threats.  “If you have a protest, that’s fine.  Make a point.  But he has to learn that they have to respect the office of the presidency.”
“Just because you want to hide behind the guise of artistic capabilities or artistic freedom of speech doesn’t make it right, and Snoop knows that, and he played very close to the line here.”

Now, the question is whether those warning shots are followed up by serious criminal or legal action.  That includes Secret Service interrogation and felony enforcement measures, depending on how seriously the threat is perceived.