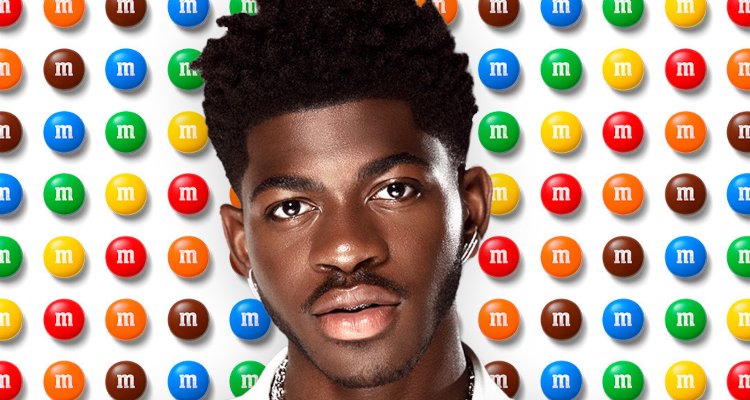 Lil Nas X has officially signed a branding deal with M&M’s, which described the pact as an opportunity “to harness the power of music and connect with fans in a fresh way.”

The agreement between 23-year-old Lil Nas X and the 81-year-old candy brand just recently came to light, and the involved parties expect to commence the partnership “through a series of initiatives set to kick off later this year.”

The Montero artist and the Mars subsidiary haven’t publicly identified the union’s precise details, but higher-ups did disclose that the aforementioned initiatives will attempt to leverage “the power of music to lay the groundwork for a new platform that brings people together to celebrate music, build connections, and enjoy more moments of fun.”

M&M’s also outlined plans to support the new platform with a different collection of “music-centric initiatives” spearheaded without Lil Nas X. And on this front, it’s worth reiterating that the candy brand at 2022’s start introduced “M&M’s Album Art Packs,” which featured packaging made to resemble album covers from David Bowie, Kacey Musgraves, Rosalía, and H.E.R.

(“M&M’S will have a presence at several summertime festivals,” execs likewise said, and the colorful candy is currently running a sweepstakes for “a 2022 Live Nation Festival Trip anywhere in the world!”)

Lastly, regarding the details and direction of the Lil Nas X-M&M’s tie-up, Mars VP of marketing Allison Miazga-Bedrick elaborated in a statement: “In the world Mars wants tomorrow, society is inclusive. And through the M&M’S brand we’re committed to inspiring moments of connection and fun by encouraging a deeper sense of belonging.

“Music is one of the most powerful tools to bring people together. Like our iconic M&M’S brand, music sparks nostalgia, memories, and fun and we are thrilled to be able to partner with one of the most trailblazing artists in the world, Lil Nas X, to help us further cement M&M’S role within entertainment,” concluded Miazga-Bedrick.

Predictably, M&M’s heaped additional praise upon Lil Nas X, dubbing the “Old Town Road” artist “one of the most influential, groundbreaking musicians of our time.” Moving past this and other subjective assessments of the Georgia native, Lil Nas X has demonstrated his ability to drum up fan interest via (largely) positive headlines in the past.

In terms of hard numbers, the two-time Grammy winner boasts a staggering 44.95 million monthly listeners on Spotify, while Montero placed fourth (behind Adele’s 30, Doja Cat’s Planet Her, and The Kid Laroi’s F*ck Love 3+: Over You, respectively) on Sony Music’s list of its bestselling projects for the 12 months ending on March 31st, 2022.

Compared to temporary partnerships with fast-food chains (like the deal between McDonald’s and BTS) and sponsorships involving adult beverages (Halsey/Budweiser, Post Malone/Bud Light, and Lenny Kravitz/Stella Artois), relatively few food products have bet on the star power of artists as of late. But Lil Yachty scored the support of Reese’s Puffs towards 2020’s conclusion, and diehard fans are continuing to shell out almost $20 per box for his special-edition cereal on Ebay.