How to Keep Your AirPods from Falling Out of Your Ears, Guaranteed… 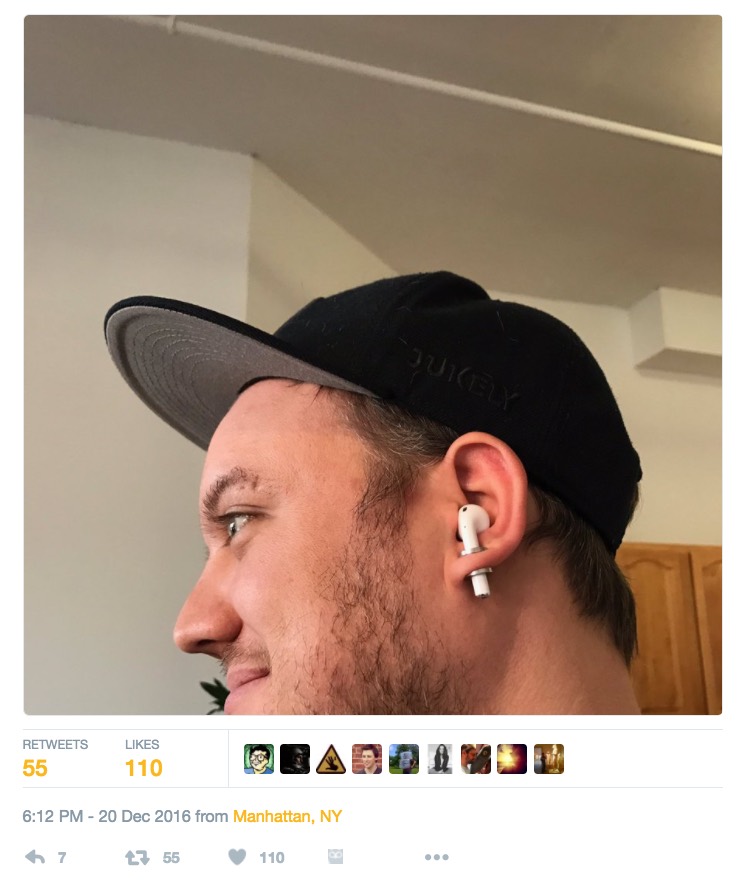 Innovation takes many forms!  Here’s a solution that utilizes a recent hipster invention to keep your AirPods securely locked in your ear.

Apple has finally unleashed its wireless AirPods onto the masses.  But buyer beware: just one slip, and you’re paying $69 for a replacement bud.

Enter Andrew Cornett (@amotion), who just invented the best solution yet for keeping these things from going astray.  Actually, Cornett is the founder of a pretty cool startup called Jukely, which focuses on subscription concerts.  Last year, Jukely raised a cool $8 million to broaden the idea, though maybe Cornett’s in the wrong business.

The piercing protection plan is the latest in a long string of AirPod jabs.  Actually, Apple’s entire wireless earbud movement has drawn some pretty hilarious ‘innovations’.  That includes a YouTube tutorial on how to ‘unlock’ the secret headphone jack on the iPhone 7.  And perhaps taking the cake is the wireless AirPod subwoofer — which is really difficult to misplace.

Then there’s the ‘AirPod Locator App,’ which always leads you to the nearest Apple Store.  Oh, and don’t forget the AirPod-catching earrings, whose basket architecture prevents unnecessary AirPod slips.  It’s enough to get you roaring with laughter, all at Apple’s expense of course.

But is the joke really on you, the consumer?

The more serious question is whether Apple is now unloading a total dud into the marketplace.  And charging you $159 for the privilege (thank you Apple, may I have another?)  Apple CEO Tim Cook says there’s no way that these in-ear AirPods will fall out.  But most people are hoping to avoid being version 1.0 guinea pigs on this experiment.

Meanwhile, Apple-owned Beats itself is releasing headphones that don’t work with the iPhone 7.  But early reviews on Beats third-generation wireless headphones and earbuds are pretty decent.  So let’s see.