This Blockchain-Powered Smart Speaker Pays Artists When You Clap 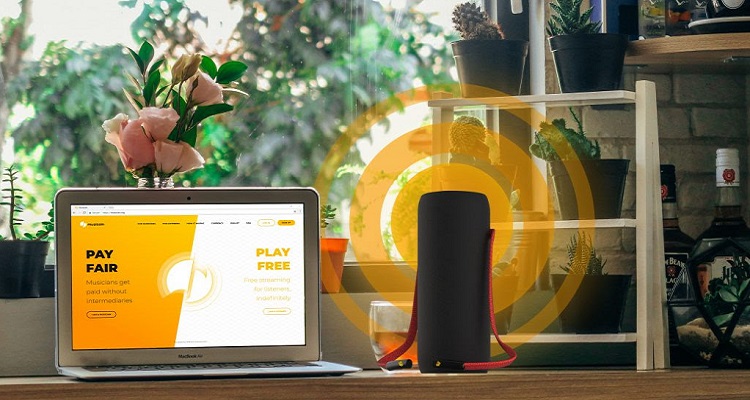 Can Volareo truly spark a revolution in the music industry?  Or will it end up as yet another generic blockchain ‘solution’?

Can blockchain technology truly revolutionize the music industry?  Some people think so.

Ahead of their IPO, to avoid further litigation over attribution problems on its platform, Spotify purchased Mediachain Labs.  The British-based startup operates on blockchain technology.

Truly believing in the technology’s power to change the music industry, Icelandic singer and songwriter Björk promoted AudioCoin with her latest album.  Fans would earn 25 cents in the virtual currency after purchasing Utopia.

Then, last month, over 40 major artists, including Mariah Carey, G-Eazy, and Sia, lined up to support Monero.  Dubbed “Project Coral Reef,” fans could buy discounted merchandise and music from these artists using the cryptocurrency.  The news sent the privacy-oriented cryptocurrency to record highs of $249.58 per share.

Now, one company has a novel idea.  Why not stream your favorite music on a smart speaker and get artists paid whenever you clap?

I can make your hands clap.

The Musicoin Project and ROCKI have announced the creation of Volareo, the world’s first smart speaker powered by blockchain technology.

Each Volareo smart speaker comes with a unique wallet address pre-loaded with $10 of Musicoin.  To allow for added compensation with tips, music fans can reward their favorite artists by clapping their hands.  They can also press a button on a mobile app.  Musicoin’s online platform reportedly has over 2,500 artists signed up.

“Blockchain technology offers levels of engagement from fans and compensation to the artists that were unimaginable years ago.  Powered by Musicoin, we designed Volareo to work seamlessly with this new movement.”

“With Volareo, you don’t just listen to and discover new music — you reward your favorite artists instantly. By partnering with ROCKI, we have created a device that gives music lovers the ability to kick off a revolution right from their living room.  This has been a dream of mine for years.”

Is anyone truly ready for blockchain, though?

The ability to support artists with a press of a button or by clapping your hands seems promising.  Yet, as with most initiatives centered around blockchain technology, several key questions remain unanswered.

First, how will anyone ensure that Volareo’s creators pay artists the right amount?  Several months ago, bitcoin-based streaming music startup Arena Music also boasted about higher payouts.  Its founder, Damon Evans, proudly boasted that his service would eliminate the music industry’s “black box,” which favors platforms and major labels’ revenue.  Soon after writing about Arena Music, though, multiple artists and organization reached out to Digital Music News.  They accused Evans and Arena Music of failing to pay up.  The startup reportedly owed Neurotic Media over $25,000.  Once DMN exposed the startup’s failure to pay, Arena Music quietly settled its debt.

Second, Volareo’s entire premise runs on fans and artists actually lining up behind and supporting Musicoin.  As I previously wrote, what will happen to companies like ROCKI and Arena Music should blockchain technology they so readily champion fail to deliver?  In the music industry, blockchain technology remains largely untested.  Many artists have no idea how the technology works.  Converting payouts to actual, usable currency is complex and highly impractical.

Besides allegedly offering “higher payouts,” what advantages truly exist for lining up behind each company’s respective cryptocurrency?

Third, you constantly hear about startups and artists launching their own blockchain initiatives.  Gramatik launched GRMTK.  British indie producer and DJ Gareth Emery has vowed that his startup would pay artists 80% of their streaming revenue in Ethereum.  Project Coral Reef will deliver music and merchandise revenue to major artists in Monero.  To fix YouTube’s terrible payouts, and provide an alternative to Patreon, former Mozilla CEO Brendan Eich launched Brave.  Users on the Brave browser could contribute to their favorite content creators with Basic Attention Tokens.  And that’s just the beginning.

With so many blockchain solutions seemingly launching every week, which one will artists rally behind?  Which one will actually work for musicians?

ROCKI and Musicoin aim to deliver Volareo by the end of 2018.  Yet, can Volareo truly deliver an innovative product that may help inspire others to follow suit?  Or will it end up as yet another product in an already-saturated list of seemingly generic blockchain solutions?