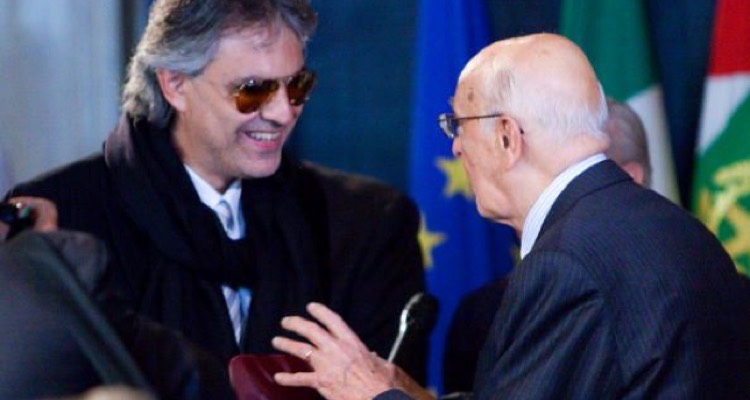 Andrea Bocelli is now meeting with President-Elect Donald Trump, with the upcoming Inauguration a top discussion point.  The blind tenor’s decision to play the Inauguration is drawing heavy backlash from fans.

Updated, Sat Dec 17th 1:30 PT: Still no word from either the Trump Administration or Andrea Bocelli on what was discussed on Friday.  As of Saturday afternoon, no official announcements.  The following was published Friday December 17th, ahead of the Trump meeting.

The meeting between Andrea Bocelli and Donald Trump is happening today (Friday) at Trump Tower in Manhattan, according to details just tipped to DMN.  As of now, Andrea Bocelli is understood to be the headlining artist at Trump’s upcoming Inauguration on January 20th (breaking details on that here).

According to the New York Times, Trump initially outlined a sweeping, all-day celebration that included portions in both Manhattan and Washington, DC.  Those plans are understood to have been drastically pared down, based on both concerns related to security and broader perception.

Enter Andrea Bocelli, who was chosen this week to play the Inauguration alongside Jackie Evancho.  Bocelli will take the musical spotlight, with a performance of the National Anthem expected.  That makes Bocelli the marquee performer, a slot occupied by Beyonce and Aretha Franklin at Obama’s earlier Inaugurations.

According to Evancho’s mother, will also sing a duet with Jackie.  Other songs besides the National Anthem will also be performed solo by Bocelli, according to details shared with DMN.

Importantly, neither Bocelli himself, nor a Bocelli representative, has officially confirmed his appearance at the Inauguration.  Those details were shared exclusively by Jackie Evancho’s mother, who outlined a general musical bill.  Accordingly, a formal announcement from Trump, Bocelli, or both are expected in a matter of hours.

Andrea Bocelli will become only the second musician to meet with Donald Trump at Trump Tower following the election.  Earlier, Kanye West met with Donald Trump, though the specific topics in that discussion were unclear.  Kanye said the discussion focused on Chicago violence and problems with public school curricula; Trump characterized the meeting as a chat about ‘life’ between ‘old friends’.

Trump himself has spoken very harshly about Kanye’s wife, Kim Kardashian.  In an interview recorded about a year after Kim started dating Kanye, Trump blasted Kim as having a ‘terrible body’ and a ‘fat ass,’ easily grounds for beef or even murder in the rap world.  So far, Kanye has overlooked those comments, a non-response that could make him a ‘bitch’ in the very alpha-male rap world.

So far, there’s been no information suggesting that Kanye will play Trump’s Inauguration.