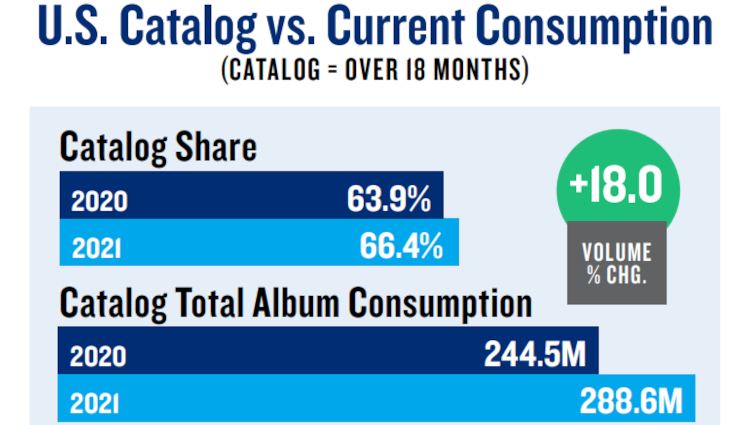 Catalog releases – or those that are over 18 months old – now account for two-thirds of all music consumption in the United States, according to a new report.

And as initially mentioned, catalog releases (encompassing music that’s over 18 months old, per the report) accounted for 66.4 percent of U.S. music consumption during 2021’s opening half, against 63.9 percent during the same stretch in 2020. Additionally, “catalog total album consumption” hiked from 244.5 million to 288.6 million in Q1 and Q2 2021 – an 18.04 percent improvement.

On the “current” music-consumption side, works that are less than 18 months old slipped from a 36.1 percent share between January and July of 2020 to 33.6 percent during the corresponding window in 2021. Nevertheless, the category’s “current total album consumption” also increased, albeit by a comparatively small 5.56 percent (from 138.4 million to 146.1 million).

Even MRC Data’s owner, Eldridge Industries, has gotten in on the trend, acquiring the entire publishing catalog of The Killers (excepting 2020’s Imploding the Mirage) last November, in its first such investment. And on the heels of a massive agreement with the Red Hot Chili Peppers in May of 2021, UK-based song-investment fund Hipgnosis is betting another $215 million on the long-term earning potential of music IP.

Plus, Concord in late April of 2021 acquired the more than 145,000-track catalog of Downtown Music (reportedly spending over $300 million to do so), whereas Round Hill Music, Irving Azoff’s Iconic Artists Group, and BMG have continued to make substantial plays of their own throughout the year.

Lastly, Shamrock Capital – which paid a reported $300 million for Taylor Swift’s catalog last November – revealed one week ago that it had raised nearly $200 million to spend on “IP across the film, television, music, games, sports media rights and other content sectors.” And SiriusXM majority owner Liberty Media hasn’t yet unveiled its plans for the half-billion-dollar special purpose acquisition company that it debuted in January.