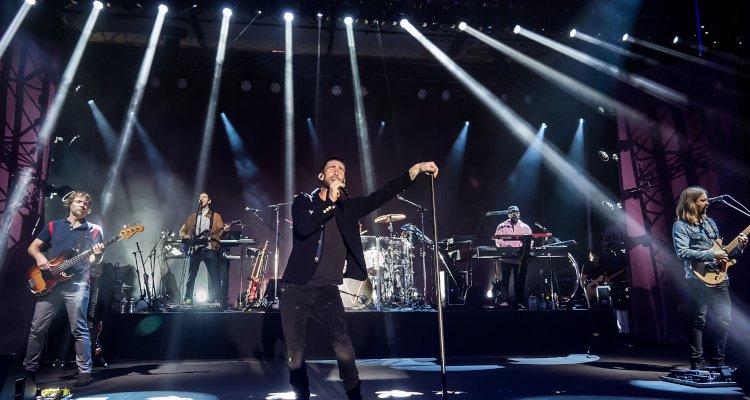 A live performance from Maroon 5, whose music is part of the newly announced bond from KKR. Photo Credit: Justin Higuchi

The New York City-headquartered investment firm’s music-IP bond – which marks “the first music royalty securitization of” its KKR Credit Advisors subsidiary – came to light in a general release from the Kroll Bond Rating Agency (KBRA). December of 2021 saw KBRA reveal plans to assign a rating to Northleaf Capital Partners’ more than $300 million bond offering, backed by the catalogs of Tim McGraw, The Who, and others.

But KKR’s almost $1.2 billion music-rights bond centers on the more than 62,000-track KMR Music Royalties II portfolio, which the publicly traded entity acquired from Kobalt Capital in October of 2021. Said sizable portfolio includes interests in tracks from “highly acclaimed artists and songwriters” such as The Weeknd, Maroon 5, and Stevie Nicks.

“An independent third-party valuation firm” has appraised the song rights at $1.127 billion, according to the release from KBRA, and the figure doesn’t reflect revenue from name, image, and likeness rights. However, the multi-thousand-track catalog’s estimated worth does account for “publishing royalties, sound recording royalties, and recoupments from artist advances,” the text discloses.

The notes are set to pay interest on a quarterly basis, with an “anticipated repayment date” – followed by payments on the bond’s principal – scheduled for February of 2027. KKR itself is expected to lead the bond offering with Credit Suisse, per Bloomberg, and KBRA intends to issue its sixth-highest rating, “A,” to the deal. (Northleaf’s aforementioned bond likewise received an “A.”)

This latest song-rights bond arrives as billions continue to reach the overarching catalog space, notwithstanding the many high-profile transactions that 2020 and 2021 delivered.

Meanwhile, BMG last month expanded upon the previously highlighted deal with KKR by partnering with Newport Beach, California-headquartered investment firm Pacific Investment Management Company (Pimco) to jointly buy additional song catalogs. And reports in November suggested that Sting was preparing to cash out of his own catalog in a $250 million deal, but the rumored sale hasn’t yet been publicly announced.